When things are meant to be

02. January 2022 · Comments Off on When things are meant to be · Categories: Uncategorized

I am open to the guidance of synchronicity,

and I do not let expectations hinder my  path.”

I banished the words ‘accident’ and ‘coincidence’ from my lexicon long ago. Instead, I think synchronicity.

Synchronicity? A concept first introduced by the German analytical psychologist Carl Jung to describe circumstances that appear to be meaningfully related yet lack any causal connection. Science has no time for it, but I do, and so do many others …

A gift ordered for Akii had not turned up so he had slim pickings, gloves and socks and a sign (ordered months before from the USA) for his doorway: Keeper of the Bees. This was on my mind as I drove to Dunkeld for milk and croissants, and little did I know that a treasure was waiting for me to find it.

Popping into the vintage shop next to the baker to offer seasonal greetings – Mara always does such eye-catching classy windows – I had a quick look around but saw nothing of interest. 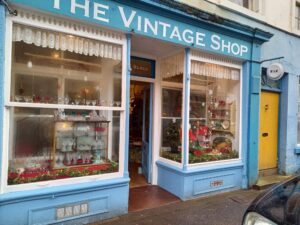 Leaving – on the spur of the moment – I called back “Happy Christmas and year end, Mara.  I don’t suppose you have anything Japanese, apart from large ceramic vases, do you?”

“Only a shrine”, she replied.

A shrine? And as she lifted it down, I gasped.

Ten minutes later it was lying on the front seat of my car, going home. I did not even query the cost, I realise now. Just said, “I’ll take it.”

Mara knew nothing of its provenance. Simply that she had found it in Edinburgh, and thought it ‘interesting’. 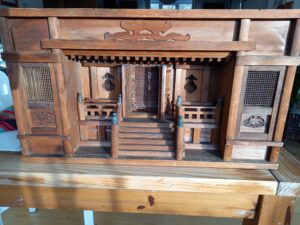 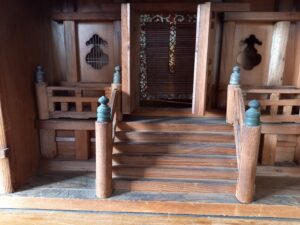 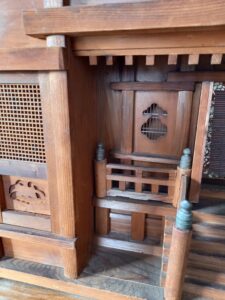 My first thoughts were that it was Shinto (animist) but not a kamidana, or god shelf. Traditional homes in Japan have one tucked high in the corner of the room for ritual devotions. Our favourite local eatery in Zushi, Harada, a family-run business as the name implies, had one that was always beautifully decorated, with white cut paper (for purification), flowers, and rice and sake for the gods.

This one is different, and neither of us quite understand why. We need Colleen Sakurai, an American artist in Japan who has collected unwanted/antinque/vintage kamidana for decades now. She would surely cast light onto its origin, use and meaning. Akii says he has found some online that look similar but they all roofed, and this is flat topped. Is part missing? We do not know, and it does not matter.

Akii has his third Christmas gift and he visits often, to stand quietly – thoughtfully —entranced.

Shinto in Scotland. Well why not? in Japan, my own far more modest kamidana was home to any number of images and artifacts, all symbolising and reflecting ‘isms’, as my book Household Stories explains: Judaism, Sufism, Buddhism, Shintoism, Animism, Socialism, Druidism, Capitalism, Imperialism, Communism … each and every one a philosophical way of looking at the world and initially at least designed to try and make sense of it for the common good.

Before Christianity spread here, and Japan, our ancestors worshipped seasonal changes and  the movement of sun, moon and stars. They acknowledged dependence on nature and prayed for nature to be kind and understanding of simple human needs.

I think of the tree or trees from which this was made, and where they had grown reaching for the sky, the skilled fingers off those who made it, and the synchronistic magic that led it to our safekeeping. And I say thankyou. 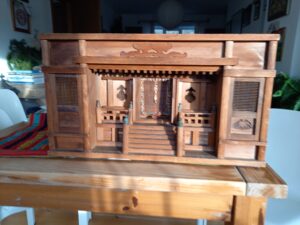