One in two people get cancer

08. August 2022 · Comments Off on One in two people get cancer · Categories: Uncategorized 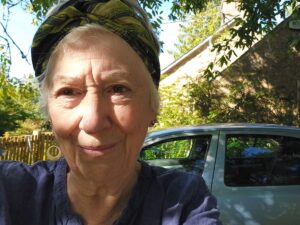 And it seems I am one of them. I am going public not to seek sympathy but because it may help others, especially those who were living in Japan on March 3, 2011.

The last few years I have been troubled by any number of symptoms: bouts of dizziness, numerous infections, gout, easy bruising, increasing fatigue, breathlessness, weight loss … Referred to Perth Royal Infirmary by my local surgery, I was monitored for several months and finally given a predictive diagnosis in May. This was confirmed after a bone marrow biopsy.

I have Myloefibrosis, an uncommon type of bone marrow cancer that disrupts the body’s normal production of blood cells. It causes scarring of the bone marrow, leading to anaemia, and enlargement of the spleen which struggles to cope. It is one of three quite rare blood cancers, with only 520 cases in the UK last year. Trust me!

I have consistently lost weight since late last year, some 11kg in total. Because the spleen is enlarged by 3cm, it presses against the stomach and reduces appetite. Eating less and less was obviously contributing to weight loss, and while I do feel more comfortable in my body than for years, obviously something needed to be done or I would just fade away from malnutrition. There are worse ways of dying, but I have a strong sense of having things still to be done.

I had a six-hour blood transfusion in early June and did seem to have more energy. The experience of sitting in the oncology clinic for so long, surrounded by patients wearing cool caps to help reduce hair loss as they underwent chemo, and yet so many upbeat and full of brave good humour, was saluatory, however.

So too was my conversation with Susan, the nurse who with some difficulty extracted bone marrow from my hip. She told me that when the clinic first opened 25 years ago, it had one doctor, herself and maybe three or four patients a day. Now there are half a dozen nurses, three doctors and up to 50 patients a day. We have poisoned our natural world, I noted; we have poisoned ourselves. She agreed.

I saw the consultant on June 23rd to discuss the result. If not effective, I had been told, there is a medication, a pill. I have indicated that I am not interested in invasive treatment, and this pill is a form of chemo, but not one with too many hideous side effects. I was advised to try it, and when approved by the medical panel, he rang me to say “Good news. Come collect your medication.”

I began the medication – two tablets a day of Ruxonolitinib – on July 4 and almost immediately felt more myself. Like Lazurus I rose from the sofa and began hectoring my poor husband, who had been nothing less than wonderful in caring for me.“Ah”, He said, “you are better”.

July 1: A week later I am doing well. Still getting tired far too easily but mentally I feel more optimistic and energised. I have blood taken locally next week, and see the Consultant at PRI on the 28th.

What interests me most is where this cancer has come from.

Blood cancers like leukemia are linked to certain poisons, like glyphosate, the main ingredient of Monsanto’s weedkiller Roundup. I believed in its early marketing that it was biodegradable in soil. But no longer. There are any number of legal cases piling up with proven evidence that Roundup’s most active ingredient Glyphosate, is toxic to the human body. (https://www.baumhedlundlaw.com/toxic-tort-law/monsanto-roundup-lawsuit/)

One quarter of people with Myloefibrosis go on to get leukemia. But this means that three quarters do not, and I fully intend to be one of these. It is not a matter of ‘fighting’ the diagnosis. Personally I dislike all the military terms generally used – “she lost the battle`’, “he fought so hard”. Instead I shall take responsibilty and try to love my cancer into submission or accept that what will be, will be. No fear of death. If there is nothing, there is nothing. But if there is something, well how interesting is that; the next great adventure

Basically, Myloefibrosis is not genetic and causes are few and little understood. The only one of the four that makes any sense to me, is the last, the single blunt word ‘radiation’. Since I was in central Tokyo, on my Friday shift at NHK on 3/11 and could not get home for 48 hours, when the cloud from Fukushima was drifting in that direction, it seems a distinct possibility to both Akii and myself.

As you get older – I am now 81 – and if odd things begin to show up health-wise, I would suggest routine blood and urine tests. This is how I was diagnosed.

I understand that statistics on Fukushima-related cancers are mostly concerned with children, and thyroid cancers in particular. It would make perfect sense that others would start showing up, but which maybe dismissed or not investigated or recorded accurately. We all know how the Japanese government chooses to cover up the difficult and unpleasant.

When I went public of Facebook on June 17, there was one response that I found especially interesting. JM is French but has lived in Japan for many years, and she too was in Tokyo on that dreadful day of earthquake, tsunami and subsequent nuclear meltdowns.

She wrote: “I have been struggling with numerous health problems since 3/11 and was diagnosed with cancer of the endometrium in 2014 in Tokyo. Luckily, if I may say, it was a stage 1 cancer and I didn’t need chemo. Now, 11 years after Fukushima, I don’t feel well. I know I was exposed to radioactive Cesium, I had a whole-body count in France. And around me back in Tokyo there were so many people with cancer, including rare bone marrow cancer. Radioactivity-induced cancer does not mean only thyroid cancer or children’s cancer, you are right. Take care and thank you for bringing up the topic.”

Another friend commented that there were a lot blood cancers in Tokyo. Really?

I had worried that I might be being over dramatic in linking my problems with Fukushima. But now I think not, and seek to reach out to those who are suffering without answers, guidance or support. I am happy to discuss this with anyone with concerns for their own health. Information is power.

August 8: Ten days into treatment, a urine infection knocked me back and it took ten days for my local surgery and the hospital in Perth to determine that I had built up a resistance to the prescribed antibiotics. By this time my bladder was out of control and urinating extremely painful. Today I am feeling much better, though whether to do with new antibiotics or the cranberry juice Buffy ordered me from Canada, I have no way of telling.

Friday last, Robyn in Oregon told me that a dear friend in Japan has leukemia. I have asked for details.