10. April 2021 · Comments Off on Moving on · Categories: Uncategorized

It’s several months since I last blogged. Maybe because I had nothing to say. 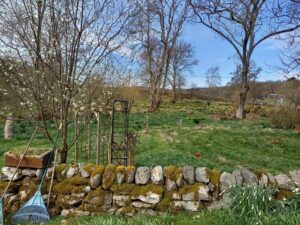 How can anyone not be happy to see Spring arrive? Right now, nature is about the only thing we can rely on and long may this continue. But for how long?

Now I get the feeling it really is time to move on. But how? Since the  virus is clearly not going to go away, it may be just another we have to get used to, get vaccinated against annually like all the others that would otherwise ruin lives …

We need to keep moving, I suppose, so as to not fall into the traps of despondency and boredom that sadly afflict so many. Personally I always find it quite odd when someone complains they are bored. I’ve never been bored in my life. There’s always been far too much to explore, learn, consider. But then that’s just me: I have always had a very powerful inner creative life, living in a dreamworld of fantasy and possibility that is as destructive as it can be fortifying.

Looking back to 2020, I am wondering where it went. My friend John Bowstead, suffering vascular dementia, died of Covid-related symptoms early in the year, and I began a DOTWW writing course on March 15. Five students and I met the first Sunday, socially distancing, but then the UK went into lockdown and we never met again as a group. Over the next weeks though I talked with Alan (who has since been helping us here in the garden), Alison, Jane and Shiona by phone and facetime, encouraging them to do their omiyage homework and move on with their writing. As a full-time carer Lucy just could not find the time or energy, but we keep in touch. 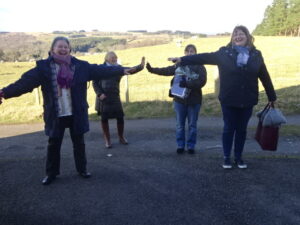 Lucy, Alison, Shiona and Jane (who had covid but is now much better…) 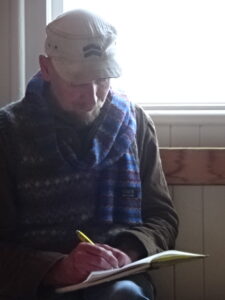 Alan the Hat, who along with Alison and Jane contributed to the Diary Writathon in December 2020

The day of John’s funeral in London in April, I wrote a piece for an anthology about wine. I had known Graham Bathgate in Japan, and now he has a small publishing company in New Zealand specialising in books about vino. Asked if I would like to contribute, I immediately remembered a certain bottle that I drank before lunch one Christmas in the 1970s (and then passed out for the remainder of the day), when John and I were living together. The resulting piece – about 1,500 Words – was accepted, and Johnny Be Goode and that bottle published in TO WINE towards the end of the year.

Summer last? A bit of a blur.

I think it was in late October, with the UK sinking once more into the mire of confusion, fear and uncertainty (along with the rest of the world) that I came up with the idea of asking writers I have worked with here over the last decade (not that many but enough) to take on a date in December and submit a diary entry. As I have since written in an introduction to the project, ‘This was in part to give them something else to think about in the run up to Christmas, but also the opportunity to reflect on the past year and what may or may not lie ahead. I also hoped it might help them recall how much they loved writing.

Many accepted but others were too busy or disinclined, for whatever reason. So I extended the invitation to DOTWW students I had worked with in Japan, and then to a few who had returned – or were returning – from Asia to their home countries. Having filled the calendar, there were some latecomers keen to participate, so there has been some doubling up on dates.’

November got busy. December just flew by. I was so just caught up with daily submissions, 39 in total. It would have been 40, but one writer who took Christmas Day (along with two others) quite simply forgot. By the end of the first week of January this year they were all compiled into one document and circulated. I then decided to continue throughout this year, by asking 24 writers to take fortnightly blocks, plus one other submitting what we are calling ‘interludes’. As with the December project, everyone is meeting deadlines to near professional standards, and the calendar appears booked until July. Beyond that I have a list to draw upon, depending on circumstances.

Perth Museum has accepted the December project for Covid-related archives, and say they also want the one in progress right now. Beyond this there is no plan. But I do think they will provide a fascinating glimpse into the past in the future, a social document that while not being exactly global in its coverage of the pandemic, offers glimpses of life experienced in Scotland, England, Ireland, Japan, New Zealand, Australia and the Netherlands in the most trying of times.

October last I also began writing what I am calling my memoirs, provisionally entitled THIS LITTLE I REMEMBER (and this much). Already I have a strapline for the end: This much I remember (and this little). Because the flood gates of memory have opened, and this was not what I was expecting. Every Monday I zoom with Kristin Newton in Tokyo, who at the same time I started writing began ancestral researches into her own Icelandic, French, Scottish and Californian roots (she was born in Hollywood! 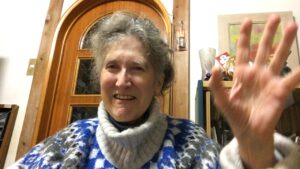 Former glass artist Kristin via zoom: We encourage one another; we laugh a lot

Every week Akii and I have driven into Dunkeld or Blairgowrie for food, and from the very start worn masks. It’s customary in Japan to cover up if one has a cold or some other bug, to protect others; it came easy to follow suit here, and we took no notice of people who stared or even laughed.

We garden. We read. We cook, watch TV, films and documemtaries, and sleep (a lot). Akii does jigsaw puzzles, writes haiku, practises guitar, zooms with friends and family in Japan. Right now he is translating my last book, Five of a Feather into Japanese and using it as a weekly teaching tool with his brother and cousin, who are both learning English. He also finds his daily list of household chores – feeding the hens (and putting them to bed at night), chopping wood and laying the fire – a familiar reassuring comfort.

Masked in public for over a year. Why do so many find it so hard? 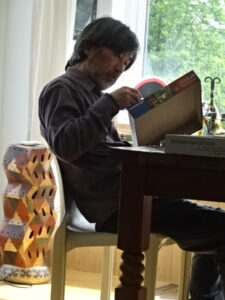 Right now Akii is jigsawed out; must be Spring. Instead he is translating Five of a Feather – a fable. (Order online from books on Amazon)

The last piece I wrote for anyone other than myself was for Carolyn Hashimoto, a former graduate of DOTWW in Tokyo but now busy with a Masters in Creative Writing at Glasgow University. As part of her studies she is launching a fashion-related online magazine on April 16 called SKIRTING AROUND. To help her promote it I did a reading of Waist Lines on video (a first, but now that I can do it, not the last) and it will be attached to a twitter feed on Monday. Keeping up with social media tech stuff is far from easy (the language keeps changing), but I am doing my best.

I am learning Spanish online via Duolingo, and wondered the other day if I ought to try keep up my Japanese. I did a test and cartoon figures onscreen began jumping up and down, saying You know a lot! All things are relative however; I know how little I do actually know. .

Taking on new challenges is the way I personally keep moving forward, physically, emotionally and spiritually. Right now, facing 1981-1991 in my memoirs, I feel more than a little discombobulated – it was a tough time and so many of those involved are still alive – but I know I have to keep going. I know it’s the only way to move forward, move on, and hopefully leave the past well and truly behind. 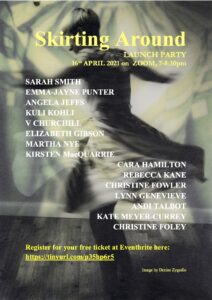